Thursday I had a fun, frustrating, and complex experience in Akko.

Akko is a 4000+ year old city continuously inhabited since the Bronze Age.  It has been home to Canaanites, Phoenicians, Jews, Greeks, Byzantines, Arabs (Christian and Muslim), Crusaders, Ottomans, Brits, and most recently, Israelis of all stripes.  It also has a Druze and Baha’i population, being home to the resting place of the founder of the Baha’i religion.  So basically it’s diverse and historic as f*ck.

My initial intent was to write about my experience on a boat.  I was exploring the historic city and noticed something curious- almost everywhere around me, people were either Arab or ultra-Orthodox (Haredi).  From now on, I’ll use the term Haredi since that’s preferred by people in that community.

It was interesting to see women in hijabs flowing by men in black hats.  Very Jerusalem-esque, but at least in this part of town, absent any other secular or traditional Jewish communities that you’d find in the capital.

Honestly, I didn’t feel particularly uncomfortable.  You might expect a gay Reform Jew to head for the hills at this point, but frankly I found it more interesting than threatening.

Then, I found a boat.  It was a 10 shekel ($3) boat tour.  The boat was being driven by an Arab man and was blaring Hasidic pop music (which I happen to like).  On board were two Haredi families…and me!  The scenery was exquisite.  Here are some pictures from the ride: 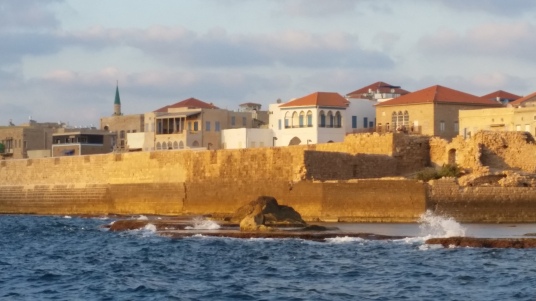 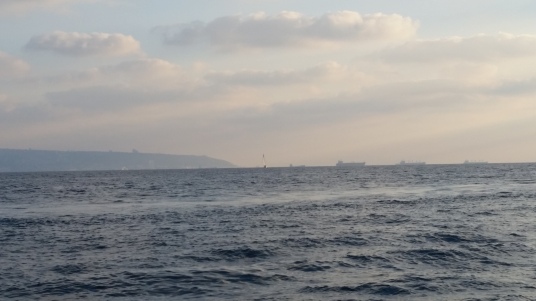 I started talking with Haredi family #1 in Hebrew.  They were super sweet and congratulated me on my aliyah.  They live in Bnei Brak, a Haredi city right next to Tel Aviv.  When I said I lived in Tel Aviv, they said “oh we’re neighbors!”.  They also helped me find a legit Ashkenazi restaurant in their city so I can get my fill of the foods I grew up on.  He even said I could just come to their house some time for a home cooked meal!  Falafel is great, but I miss my whitefish salad and kugel.

Then I overheard Haredi family #2 but they weren’t speaking Hebrew- their girls were laughing and taking selfies…in Yiddish!  Whoa!!  This got me very excited!  I started talking to them in Yiddish and it turns out they’re Vizhnitzer Hasidim from Borough Park in Brooklyn and were in town for a wedding.

They were polite but a little less warm than the other family.  I think it’s because they thought I might be ex-Hasidic (seeing as so few non-Hasidic American Jews speak Yiddish anymore).  The father kept asking me for my Hasidic lineage, to which I kept replying that I don’t have any (that I know of).  At first, I was kind of annoyed for having to repeat this over and over again.  Then, I realized he was playing the timeless game of Jewish geography.  Turns out, he knows some Adlers and was trying to see if we were related.

Before I got off the boat, I made some chit chat with the Arab driver in Arabic.  But he was too busy taking pictures of the other boats (should you be doing while driving?) for anything too in-depth.  But a friendly guy.

So there I was, on a boat, speaking Hebrew, Arabic, and Yiddish.  The progressive gay Jew hanging out with Haredim and Arabs.  While to a number of secular Israelis and even some Modern Orthodox Jews, a city teeming with Arabs and Haredim is their worst nightmare for Israel’s demographic future, I actually found the experience fascinating and rather benign.  I’m not saying there aren’t legitimate concerns for Israel’s future, but in the end we’re all people.  Among groups that, at least if all you do is read The New York Times, you’d think would be ripping each other’s throats out, there was a pretty basic coexistence that was refreshing.

Then, I made the mistake of the internet.  On my way home from Akko (Israel has a pretty clean, efficient, and cheap inter-city train system, something America might get around to one day), I opened Youtube to find dabke music from Akko.  Dabke is an Arab folk dance found in Lebanese, Syrian, Palestinian, and Jordanian culture.  It sometimes has nationalist overtones.  Overall, it is fun.

There are videos of dabke in Akko on Youtube, but several of them had (in my opinion) inflammatory titles like “Dabke in occupied Palestinian Akko”.  There was even a video from neighboring Haifa, which has a recorded Jewish history going back to 200 C.E., about 450 years before Arabs conquered the area.  The Haifa video was entitled “Palestinian dabke in ‘Haifa’ in the heart of Israel”.  I’m not sure exactly why Haifa was in quotes, but if the angry back and forth in the comments section was an indication, the title was meant to be provocative.  Side note: never read the comments section of anything ever.

I then read an article that said an Arab man in Akko claimed Jews were pushing his people out so they would go live in Europe instead of Akko.  He said Jews were given preference for new housing.  The first sentence seems specious because if Jews are trying to push Arabs out of Akko, they’re not doing a very good job because there are a lot of Arabs everywhere.  Unlike in everywhere else I’ve seen in Israel, I even saw signs with Arabic on top and Hebrew on the bottom.  That being said, it’s true that during Israel’s War of Independence, many Arab communities including Akko were displaced- sometimes voluntarily and sometimes under pressure from Israeli troops.  It’s also true that there has been discriminatory housing policy, so even if this man was exaggerating, there may be truth to what he is saying.

Then, for things to get more depressing, apparently there used to be a larger Jewish population in Old Akko, going back a long time.  However, due to demographic changes they moved to other parts of the city.  Then, apparently the Islamic Movement, an Islamist organization, removed the signs to historic synagogues and replaced them with quotes from the Quran.  If this is true, this is truly depressing.

I began to feel deflated.  Was the coexistence I was seeing everywhere just a facade?  Do Israeli Arabs really just see me as an occupier like the videos on Youtube indicated?  Do they know nothing about Jewish history in this land (or elsewhere)?  Were Jews really pushing Arabs out of Akko or discriminating against Arabs in housing?

These are all complex questions that deserve sophisticated and well-researched answers.  I don’t have the expertise at this moment to answer them all right now.  I do believe people are entitled to different narratives so long as they respect each other and empathize.

What I can say is this: Arab identity in Israel is diverse.  Half of Arab citizens of Israel recognize the right to a Jewish state.  Half don’t.  26% identify as Palestinian, 36% percent as Palestinians in Israel, and the plurality (37%) as Israeli-Arabs.  Another survey found 64% believe Israel is a good place to live and 43% favor their Israeli-Arab identity over a Palestinian one.  Perhaps surprising to the Western ear is that 24% of Arab Muslims in Israel vote for Zionist parties.

So in the end, is the coexistence I saw on that boat a facade?  Are my conversations with Arab-Israelis merely window dressing to deeper prejudices?

Sure, I think that there are some prejudices here that are merely beneath the surface.  When you read about Arabs throwing rocks at Jewish worshipers in Jerusalem or that between 32-48% of Jewish citizens would favor expelling or “encouraging emigration” of their Arab neighbors, you know there is prejudice here.

Was that Haredi man who invited me to his house really just a bigot against secular or Reform Jews?  Was the Yiddish-speaking family that joked around with the Arab driver just faking it?  Are my secular friends reading this blog rolling their eyes and thanking God they weren’t on that boat with me?

Perhaps- we’ll never know.  But rather than stew in cynicism, I’d like to enjoy the moment I had in Akko.  A moment where people pretty much got along.  A gay Reform Jew, two Haredi families, and an Arab boat driver.  Hebrew, Yiddish, and Arabic in Akko.