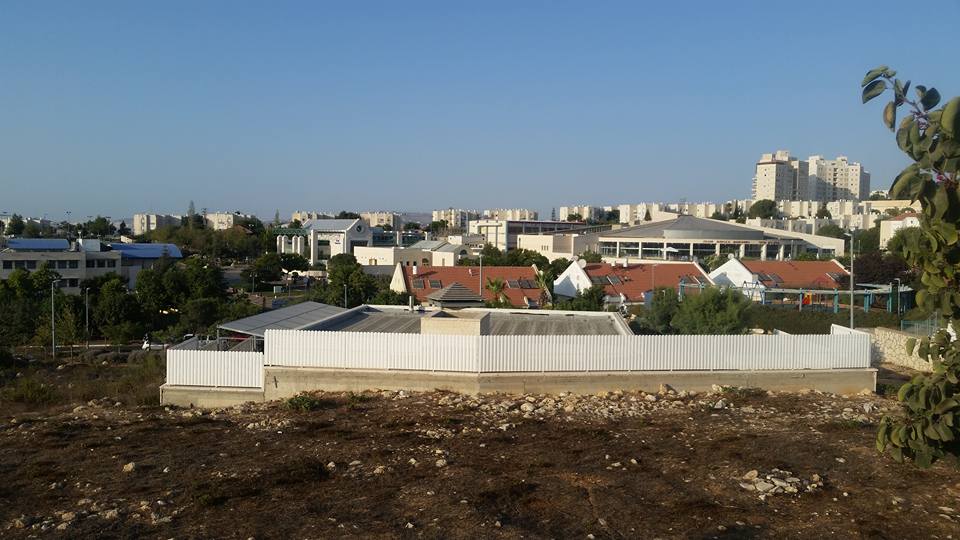 Today, I went to a settlement.  Ariel is a beautiful city of 20,000 a little over an hour by bus from Tel Aviv.  It’s located beyond the Green Line in Samaria (Hebrew: Shomron).  This area is called Shomron because that’s the name of the ancient Jewish capital of the Northern Kingdom of Israel that was in this vicinity.  To most Israelis, this is Israel (larger settlements like this tend to be part of the national consensus).  To international organizations, this area is often known as the West Bank.  And to most Palestinians, it’s part of Palestine.

This is not a typical tourist spot for Reform Jews or part of the Gay Pride Circuit, so I had never been here before (as a queer Reform Jew).  I’m a curious guy and open to new things, so I hopped on a bus.

The most interesting thing about Ariel is that it’s not interesting.  I don’t say that to be mean- there are actually some attractions in the area like stalactite caves and an archeological site of a 3,000 year old Jewish city.  Unfortunately, because this is a small town, none of that was open or easy to get to.

What I mean is that it’s very normal.  I think the image me (and many progressive Jews and non-Jews) have in our mind of a settlement is an Orthodox family of 16 living in a trailer on a hilltop beating up Arabs.  Just to be clear- there’s nothing wrong with an Orthodox family of 16, it’s just that I think many people think about settlements as a caricature, not realizing their diversity.

Ariel is possibly the most (Jewishly) integrated city I’ve been in in Israel.  There are loads of secular people, there are Russians, there are Ashkenazim, there are Mizrachim (blasting some cool Mizrachi music I stopped and listened to).  There’s a Kosher Mexican restaurant and a non-Kosher restaurant with Thai food.  There are men in yarmulkes and women in tattered jeans with purple hair.  There are judo lessons and piano concerts and even a mall.  There are Palestinian workers and there are Arab-Israeli students at the local university.

The truth is, in a lot of ways, Ariel is like any other city.  I think it’d behoove people of all backgrounds, particularly from the progressive world I come from, to understand there are many reasons people might live in a settlement.  For some people, it’s just about affordability.  Other people might like the view.  And for some people, it’s a religious statement.  For religious Jews, this is the land God promised us.  And the West Bank/Shomron was an integral part of Jewish history for thousands of years and is still home to many sacred sites.  I’m not interested in the politics, I just want people to understand that if you can’t put yourself in the shoes of a religious Jew who wants to live in the land of their ancestors, you’re not going to do a great job of figuring out how we can all live together.  Empathy is about understanding where other people come from even if you disagree.  People are complex and come in all shades of good and bad- including settlers.

As I prepared to catch my bus back to Tel Aviv (the West Bank is really, really close- you can see Tel Aviv from Ariel), I started to well up.  I wasn’t sure why at first, but I figured it out.  I snuck over to some bushes and just started balling.  As much as I liked exploring Ariel today, I just couldn’t help but think about the Palestinian villages I could see on the hilltops.  What was life like there?  First-hand- I don’t really know.  If we were elsewhere in Israel, I could just hop on a bus and go find out.  But reality here is a bit starker.  Due to the complicated situation (on both sides), I can’t just hop on a bus and visit a Palestinian village.  I’m not even sure if/where it’s legal to do so.  Or safe.  The situation made me so sad and the tears came down.  I hate seeing the world broken.

I told myself that whenever I’m feeling despondent here, something magical happens to lift my spirits.  And I was right.  As I was waiting for the bus, I saw a familiar face.  Sarah is a Muslim Arab-Israeli I met through a Hebrew-Arabic practice group in Tel Aviv.  What are the odds that my first time visiting a settlement I bump into an Arab friend when I’ve only been here for two months?  There are coincidences and then there’s bashert.

We hopped on the bus and I asked if I could sit next to her (important detail).  We got to talking about Arabic dialects in Israel (I’m trying to figure out which ones to study- I already speak Syrian which is intelligible but want to get more local too).  We spoke in a mixture of Hebrew and Arabic.  She told me about her work at Ariel University (that’s right- she works at a college in a settlement) and her work with promoting Hebrew language studies for Arabs in her town of Kafr Qasim.

Then we pulled up to a checkpoint.  I’m glad there’s security to make sure everyone is safe.  That being said, something fishy happened.  Two guards came on board and walked around, but the only person they asked for ID from was the Muslim Arab woman in a hijab next to me- my friend Sarah.  There wasn’t even the illusion of not profiling her.  Then they looked at me sitting next to her: “Are you with her?”  My answer (as I sat there fairly scared shitless): “We’re friends”.  At that point, the guards requested my ID.  After some skeptical glances, they gave us our IDs back and left the bus.

I asked Sarah if they always asked her for her ID.  She said yes.  She also said that if I hadn’t been sitting next to her, they wouldn’t have asked for mine either.  I said that I knew.  It was kind of a scary experience for me, and I’m sure it’s upsetting for Sarah too even if she has resigned herself to it.  Sarah is a full Israeli citizen born and raised.  I’m not sure why a terrorist would be dumb enough to put on a hijab, but I’ll take at face value that anyone could be a threat and the guards have a stressful job.  That being said, check everyone’s ID, keep people safer, and stop being racist.  It’s a win-win.

I have to say I’m proud of myself.  When I was asked if I was with Sarah, the easy way out would’ve been to say that I don’t know her or barely know her.  But the words that came out of my mouth, under pressure, were “we’re friends”.  If that makes me an Arab by association, so be it.  I’m a human being and damn proud of it.

Sarah got off the bus and I headed back to Tel Aviv.  I couldn’t help but thinking about what an overwhelming day I had.  Full of meaning and also a lot to process.  How I try to find humanity in every community- settlers, Arab-Israelis, Palestinians- everyone.  And how that can be really hard.

Israel is a verb.  It means “wrestles with God”.  It would’ve been easier for me to sit static on the beach today (and frankly I might need that after this trip).  But instead, I moved, I wrestled.  I went by myself to a place where most people I know have never stepped foot.  It was interesting, it was hard, it was brave.  I’m proud of myself.

As I got off the bus, I thanked the driver in Hebrew, assuming he was Jewish.  He responded back “ma3 asalaameh” – that’s Arabic for goodbye.  He winked at me and I smiled back.  Guardian angels come in all shapes and sizes 🙂 .

8 thoughts on “Arab by association”