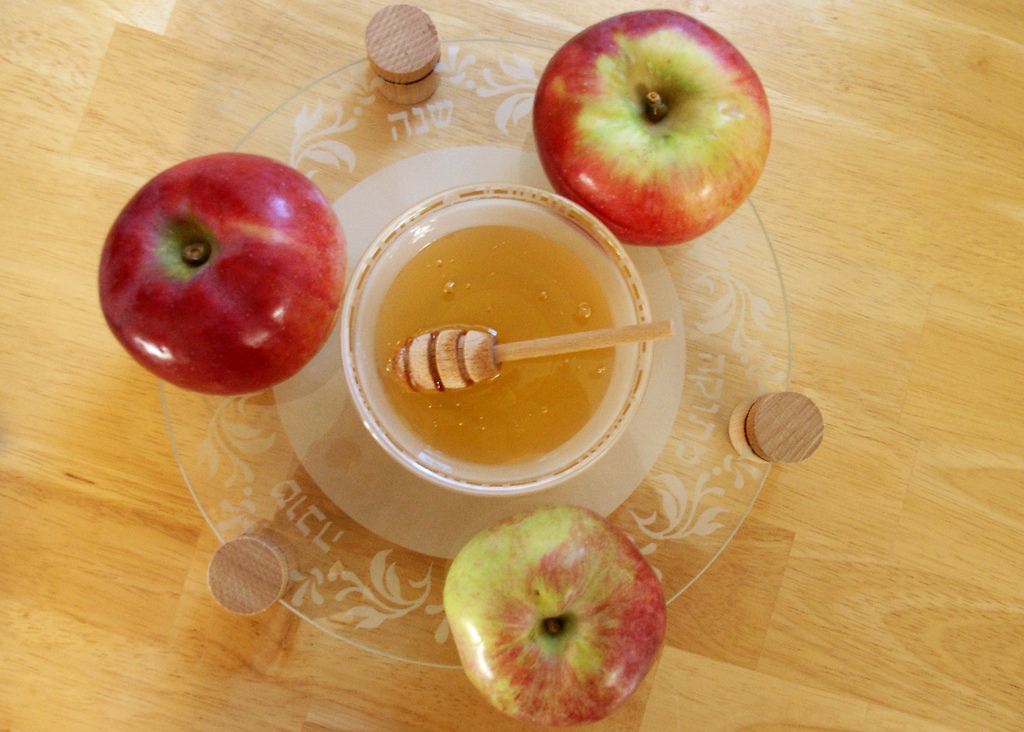 Tonight, Rosh Hashanah ended.  As a Reform Jew, I observe one day of the holiday, which you can read about here.  I had amazing meals with friends, went to services for a taste of home, was greeted everywhere with Shanah Tovah, and even ate sushi 😉

This evening, I decided to go Israeli dancing.  Anyone who’s known me for a while knows that I love Israeli dancing- it’s one of the first things I did in Israel.

I go to this marathon event (it goes till 6am!) and there are hundreds- I mean hundreds- of people.  All ages, all attires (I even saw a bustier), and tons of enthusiasm.  There’s even a guy I know from dancing in DC.  Because, Jews 🙂  The music was booming- there was even a live band to accompany the music!  They had a screen that showed a picture of each singer, the name of the song, and a running clock of how long the marathon had gone on!  I recognized so many of the songs I danced to at home- it was fantastic.

During couples dancing (which I tend to avoid unless I’m with a friend- some of the middle aged women can get frisky!), I stepped aside to rest.  I saw this cute guy so I started talking to him.  I wished him “chag sameach”, a happy holiday.  He said “what holiday?”  I said “oh are you not Jewish?”  And turns out, he wasn’t.  He was just working the event.  In fact, he’s an Arab Muslim from Nazareth named Muhammad Abbas.  Poor guy’s name is so, so close to the name of the leader of the Palestinian Authority that pretty much nobody, Arab or Jewish, really likes.

He’s a student at Tel Aviv University studying English literature.  He only listens to American music and he loves dark, intense American novels.  We talked in Hebrew and Arabic about American film and literature (I recommended he watch Office Space for a clever satirical movie), and he stepped outside to work.

Then it hit me- I owed him an apology.  Growing up as 2% of the American population, I was constantly barraged with “Merry Christmas” for a two month period every year.  I don’t begrudge anyone saying Merry Christmas- I just don’t want it said to me because it’s not my holiday.  I stepped outside and I apologized to him for assuming he was Jewish.  He took it totally in stride and laughed it off.  We also both knew that this year, the Muslim New Year falls on the same day, so I ended up being right in wishing him a Happy New Year 🙂 .  In the end, I do feel like I owed him an apology because I made an assumption about him and it wasn’t the way I like to treat people (or be treated).  Just goes to show that you can’t assume a cute Semitic-looking boy here is Jewish!

At this point, a man selling food in Hebrew with an Arab accent starts talking to me saying not to worry about my holiday faux pas.  That we’re all people and it’s good to wish each other blessings.  This man, Ramzi, is from the magical place called Daliat Al Karmel.  This place entrances me.  If you’ve followed my blog, you know that in the course of 2 months in Israel, I’ve been there twice.  That it has a special magic- the people, the trees, the view- that I have seen in few places in the world.  And this man, just for this event, happened to be selling Druze pita in Tel Aviv!  He lives up North!

We switch over to Arabic (and back and forth to Hebrew and English) as we talk about life and his village.  He invited me to come visit him.  You ready for a real twist?  He owns a Matah – an orchard.  My Hebrew name, which I chose when making aliyah and is extremely unique, is also Matah מטע.  He invited me to come up whenever I want and we’re going to hang out on his orchard.

As if my night couldn’t get any more fabulous or diverse, on my way home I see an Orthodox family by an ambulance.  In America, you’d pretty much say a prayer for them in your head and move on- not wanting to invade their space.  Since this is Israel, I did the exact opposite.  I walked over and asked if I could help.  One woman said she couldn’t ask because I was Jewish (Orthodox Jews believe that it is not permissible to make another Jew work on a holiday).  The other woman, perhaps in an act of pragmatism, simply told me they needed a cab, so I ordered it.  I’ve spent enough time in pluralistic Jewish circles to know that even if Orthodox Jews can’t ask me to do something on Rosh Hashanah, if I just do it, it’s acceptable.

I ordered a cab but just in time, another one came by and they got in.  Luckily it was nothing life-threatening, but it looked like their little girl had a wound on her head.  I hope she’s feeling better.

As I walked away, I wished them a Shanah Tovah.  I knew they were celebrating my holiday 🙂 .  They shouted back with a smile “ktivah vechatimah tovah” – may God write you a good year in the Book of Life.

On my way home, I realized just what an amazing holiday I had had.  In the course of one day, I went from Reform services to Israeli dancing to hanging out with a Muslim friend to talking with Druze and helping Orthodox Jews.

This is my country.  Where every fiber of my being is filled with meaning.  I couldn’t be prouder to start a new life and a new year in Israel.  My diverse, caring, and wonder-filled home.

Shanah tovah from the place where miracles aren’t on 34th street- they’re on every corner.

One thought on “My Druze, Muslim, Orthodox, Reform Rosh Hashanah”