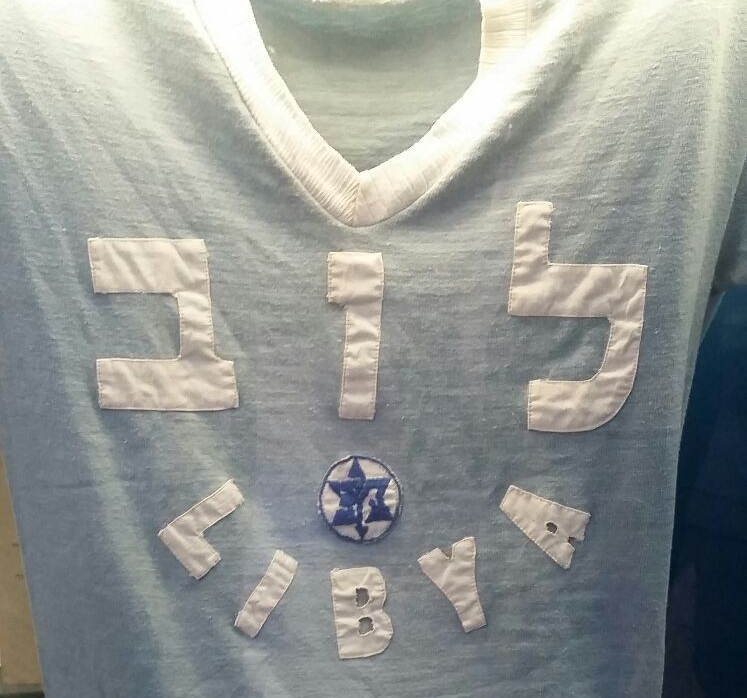 Big moments happen in small ways.  Tonight I was at my favorite sushi restaurant.  You wouldn’t expect to find it in my neighborhood, a place where the Mizrachi music blasts and the streets have a special smell.  Yet my neck of the woods is full of surprises.

As an oleh, an immigrant, who came alone- life can be hard here.  I have no family support network- and this is a country built on family, much moreso than America.  People don’t just see family twice a year on holidays here.  They often live right down the street.  The good part is people are willing, often eager, to take me in.  In America, I felt even lonelier.  Having no family- I cut them off due to their abusive behavior– I had to find places to spend holidays and Shabbat and even dinners.  I found myself growing closer and closer to certain restaurants there because I didn’t want to eat alone.  And some, like my favorite Thai digs in D.C., really loved me and even gave me gifts on my birthday.  When you have no family, you build it yourself.

The downside to not having family here, in such a family-centric society, is you really feel it.  Saturday, Shabbat, is not just a day to relax- it’s a family day.  With family meals.  And if you’re not invited to one, it often feels solitary.

Today, I spent my day exploring the Libyan Jewish Heritage Center in Or Yehuda.  Absolutely free and full of fascinating history, I had a blast.  A Libyan man there gave me a personal tour of the entire place- in Hebrew and Arabic.  Missing the North, where I had just enjoyed speaking so much Arabic, it was great to speak it in my own backyard.  With a Jew 🙂 .

Moshe made aliyah, immigrated to Israel, when he was 7.  He was born in Tripoli, Libya.  Heir to a 2,000 year old Jewish tradition that predates Islam.  Like many Jews in North Africa, Libyan Jews were subjected to Muslim pogroms, or massacres, in the 1920s-40s.  I also learned today that almost 3,000 were even sent to Bergen-Belsen and gassed by the Nazis in the Holocaust.  I had no idea.  We usually associate Holocaust with Ashkenazi Jews (and some Sephardim, like in Greece).  I knew of some persecutions in North Africa, but not much.  But the Holocaust artifacts- even someone’s suitcase from a concentration camp- really took me by surprise.

Moshe walked me through everything, with such patience and kindness.  I had the whole museum to myself- which I hope you’ll fix by going and visiting.  If you don’t, it’s very much your loss.  I saw Jews’ Libyan passports, a Libyan Zionist youth group T-shirt, Arabic-language legal contracts, 500 year old Torah scrolls, and so much more.  A Passover haggadah in Hebrew, Judeo-Arabic, and French.  I got to hear Libyan Jewish music and hear stories of heroism by Libyan-Israeli soldiers in the IDF.  Even a 1950s teudat oleh.  A true treasure. 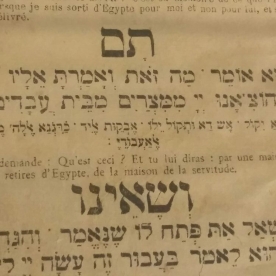 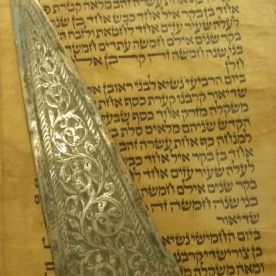 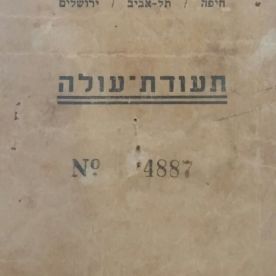 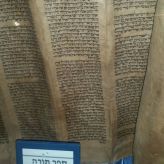 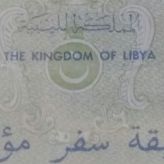 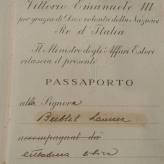 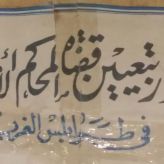 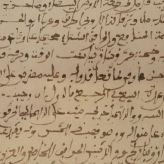 Libyan Jews lost all their property when they had to flee to Israel.  Now Jewish cemeteries there have been bulldozed, built over.  Jewish homes occupied by Muslims.  Despite the fact that Moshe said Muslim women would look after him and bring him home to his mom.  The relations were not always bad.  Yet not a single Jewish community remains.  So if you want to know why Jews feel like we need a state of our own, just take a look at Libya.  When we are subjected to the whims of non-Jews, it always- always ends badly.  Maybe not during every epoch- but the sad truth is the finale remains the same.  A minority without a home base can’t really protect itself.

After a delicious Bukharan Jewish meal near the museum, I did a little shopping for my apartment and headed home. 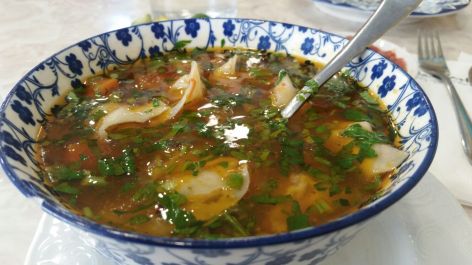 At home, I did a little tidying and started to feel tired.  Physically tired, perhaps- I didn’t sleep well last night.  Coming back to loud and chaotic Tel Aviv after some days in the quiet, peaceful North was hard.  And to boot, it was friggin hot.  But also emotionally tired.  Tired of being alone in this gorgeous land, where I make friends here and there but I just don’t have a home base (though perhaps I’m building many).  I don’t have my own “Israel” to come home to.  But I’d sure like one so anyone looking for a third of paradise, hit me up (that’s a Jewish joke- but it’s not a joke 😉

I realized that my neighborhood sushi joint- that’s where I feel at home.  Any time I need someone to eat with, when it’s just too tiring to make plans, I go there.  And I love the people there.  The Filipinos who run it, the Mizrachi girl who says “be’ezrat hashem” (God willing) every time I tell her about a cute guy, and the adorable Filipino-Burmese-Israeli kids who like to play with me in Hebrew.  One even made me origami 🙂

When I go to this restaurant, I never feel awkward.  In the States, sometimes I felt “weird” or “imposing” or even desperate if I’d go to the same restaurant “too often”.  Here, even if it’s only been a day or two, my friends ask me “where have you been?”

Notice I said friends.  Because we don’t just talk about the weather or football or our plans for the weekend.  We talk about homosexuality, family, children, Tagalog, Burmese, Israeli culture.  We share jokes and we laugh.  I play tic-tac-toe with the kids- and I usually lose. 🙂

The past few weeks, a Burmese relative of one of the employees has been filling in for someone.  My knowledge about Burma basically extends to a delicious restaurant in suburban Maryland, an episode of Anthony Bourdain, and the famed human rights activist whose name I can never pronounce.

What I know about Burma is that it was- and in some ways still is- “al hapanim”- a disaster.  Run by an isolated military dictatorship, many Burmese fled.  A brief glance at Wikipedia reveals child soldiers, slave labor, and ethnic cleansing.

As they shut down the shop at midnight (because I’m lucky enough to be able to walk to a sushi joint open till then), I talked to the Burmese man.  He’s been in Israel for over 20 years.  He has some sort of official refugee status.  It affords him a legal visa, but not citizenship.  He said he might be able to get it through an expensive process, but his coworker indicated he couldn’t.  It wasn’t clear.  He said he could go to America, where he has relatives, but he prefers life here.

It wasn’t even entirely clear how much, if at all, he could travel outside the country.  And this is a country that has lived through several wars just since the time he arrived.

He pulled out his Burmese passport.  I’ve never seen such a thing.  It was worn and full of Israeli visas (which frequently have to be renewed- for some workers every 3 months).  We had a huge laugh together when we saw his picture in the front.  He was young.  Maybe 20 years old in the photo.  Today he’s over 50 and while he has a deep vibrancy and a full laugh, you can see the wear that working hard jobs has taken on him.

To see an expired Burmese passport, from a Burmese refugee, to talk with him in Hebrew- and laugh.  In my neighborhood.  That’s a new feeling.  The same day I saw Libyan passports of Jews who fled for their lives.  I felt gratitude for the fact that I got immediate citizenship and guilt that he still doesn’t have it.  Joy at making a new friend.  And pride that he prefers Israel over America and all other countries.  Deep empathy- it must have been excruciating for him to leave his homeland and to be so far away.  I asked him- he misses it.  Yet he keeps laughing and smiling.  A true survivor and thriver.

Libyan Jews, me, and my Burmese friend.  We all fled our own traumas.  Islamic extremism, a deeply abusive family and anti-Semitism, and a ruthless dictatorship.  And we’ve all managed to make Israel our own.  Our home.  We faced and face our own challenges.  I hope Libyan Jews here manage to remember and preserve their heritage even as they contribute to our beautiful nation.  That Libya will repent and repay the Jews for ethnically cleansing us.  I hope I continue to find stability, love, and happiness – family – in my new country.  A place where I feel increasingly healed and have more healing to do.

And for my Burmese friend- I wish you nothing but love.  May you continue to grow here.  May you get the legal status you need or want to feel safe.  May you feel welcome.  Even if you’re far from your Burmese family, I hope you feel embraced by your Israeli one.

Count me in as a member.

3 thoughts on “A Burmese refugee, Libyan Jews, and me”