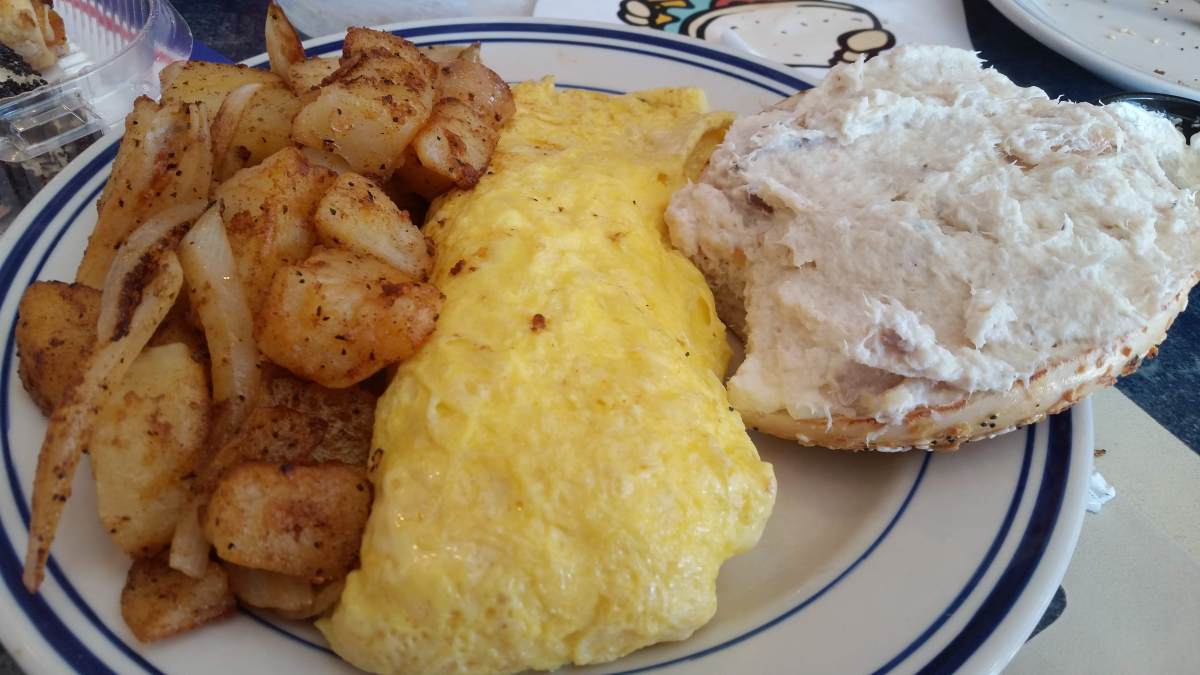 Today I found myself in a Jewish deli.  I love Jewish delis.  Severely lacking in the Jewish State, Jewish delis still dot the streets of major American cities like New York, Philadelphia, Chicago, and L.A.  Filled with matzah ball soup, kreplach, black and white cookies, rugelach (the dense American kind made with cream cheese), and all of my favorite childhood foods.  Including whitefish salad.

In need of a pick me up after a rough hour or two, I slurped on my chicken soup.  The salty savory flavor filling my taste buds with joy and warmth.  The kind of warmth sometimes lacking in America.  A place so rigid and overly burdened by rules that when I emailed a local archive about visiting, they told me they couldn’t accommodate me for the next two weeks.  I’ve traveled to 10 countries in the past two years and I’ve never even had to make an appointment to visit an archive.  I even walked in unannounced and held Inquisition-era documents from the 1200s in the city of Tortosa.  God forbid you slightly disturb an American archivist- their schedules seem to be made years in advance.

On the contrary, while Israel is a place that lacks rules (hence the chaotic man-eats-man rental market), it does not lack warmth.  Once I visited a small moshav that now forms part of Ramat Gan, a suburb of Tel Aviv.  Unannounced, I walked in to a tiny museum showcasing the area’s history.  Filled with amazing knickknacks and chotchkes, I stood in awe and perused.  The man staffing- and I use that word liberally, he was just sitting in a chair writing some notes and answering calls- told me to come on in.  You don’t have to “sign in” or wear business clothes or make an appointment.  He welcomed me in and proceeded to show me the tiny two room archive- for two hours.  No cost, no rush.  He regaled me with stories of the moshav- when the area used to be agricultural as opposed to part of a 2 million person metro area.  He showed me pictures of fallen soldiers he knew himself.  When he apologized for having to grab the phone after two hours of chatting, I then wandered alone for another hour.  Unsupervised, trusted.  Allowing my mind and my spirit to be guided by what I saw.  This is the best way to learn and experience.  Rather than goose-stepping through a syllabus or knowing “what you’re looking for”, sometimes you let your mind wander and discover amazing things.

Organization, then, is America’s greatest strength and weakness.  I never have to push in grocery lines here.  Americans might laugh at this, but this is the reality of living in Israel and not a small number of countries around the world.  You have to constantly advocate for yourself.  Rules are only as valid as your will to enforce them.  And if you’re not prepared to cut someone off in line at the grocery store, you simply won’t get to pay.  Apply this to literally every aspect of life in Israel and you can see why it is tiring.  Assuming someone else will respect the rules simply because they are there is an American value- not one to take for granted and not one to presume the rest of the world plays by.

This organization is a great weakness when it comes to creativity, spontaneity, and resilience.  The ability to plan is predicated on stability.  If you know that two weeks from now at 2pm you’ll be free, alive, and have enough money, you can make plans to grab coffee with a friend.  It’s a soothing stability that can allow for truly great long-term plans to come to fruition.  A stability often lacking in Israel, where things seem to shift from moment to moment.  You need to reconfirm that your friend is going to show up on the day you’re supposed to meet- or oftentimes they won’t show up.  Plans are a suggestion unless reconfirmed- and even then, not a small number of times people won’t show up.  It’s not seen as socially rude because you’re entitled to do it too without any repercussion.  To see how you feel.  It’s a different culture.  Flexibility can be a two way street both frustrating and liberating.  Plans in Israel are plans- not etched-in-stone commitments hovering above Moses’s head.

In America, the impulse to plan is so strong sometimes that Americans don’t realize how strange they are.  One Friday, an Israeli friend said that he asked an American here to play basketball together.  The American said sure.  Thinking that meant now, the Israeli suggested they play the next day.  The American, looking puzzled, pulled out his Google Calendar and (without thinking it odd- which it is) suggested they play in two weeks.  Two weeks- this cursed amount of time that apparently both archivists and basketball players live by on this dreaded continent.  Why is it so hard to live in the moment and play basketball when you feel like it?  How do you even know you’ll want to play in two weeks, or what the weather will be like?  Of all the places I’ve visited, Americans are some of the most rigid, placid, uncreative people I’ve ever met.  Perhaps that’s why immigrants to the U.S. are disproportionately credited with inventing new patents.  What would it look like to invite someone to coffee and go…the next day?  Would it be “too soon”?  Would it be too spontaneous or erratic or confusing or disrupt your yoga schedule?  There’s nothing natural about American hyper organization- and the fact that so few of you see that is a testament to your inability to see other ways of doing things.  It’s a rigidity that hampers the growth of this country- economically, socially, and politically.  On both sides of the aisle.

After yet another archive telling me I had to schedule an appointment to sit down with a book, I found myself noshing on my kreplach in the Jewish deli.  I had met nice Americans (an odd phrase to have to write- but I sometimes feel like an immigrant in my own country), but I was frankly tired of them.  I needed some good Jewish cooking to feel at home and bask in a bit of my own culture.

Then, the most incredible thing happened.  A black man walked in with a young presumably white man (although he was kind of olive skinned like me).  The black man was almost certainly homeless.  And the white man was dressed like he worked in a nearby law office.

The white man approached the counter- but it was the black man who ordered.  “One brisket sandwich, some chips, and a coke”.

The cashier repeated the order and gave the white man the check.  The latter paid, shook hands with his grateful (new?) friend, said “we have to stick together” and left.

It was the most beautiful thing.

I raced to pay my bill to try to meet this incredible young man.  This was the kind of American, the kind of person, I’d like to be friends with.  Spontaneous, generous, humble.  Like I see myself.

I rushed out the door, but the young man was nowhere to be found.

I looked left and right, walked around the block, but this mysterious hero disappeared, like a character from a Baal Shem Tov story.

I felt inspired.  Disappointed that I couldn’t find him, I realized I could do the same thing.  I walked up to a homeless man begging by a street corner.  I asked him if he’d like some food.

He stared at the cart on the street selling the usual- Skittles, M&Ms, water, Coca Cola.

“Oh, I’d like a Pepsi and some CheezIts.  I love CheezIts!”

He looked sheepish.  “I’d really like…the flavored ones,” as he pointed to the white colored chips below the chemically orange ones.

“Sure, no problem, whichever ones you want.”

I asked the Indian man behind the plastic window if he accepted credit cards.

“Only over ten dollars.”

I sighed.  Short on money myself and not really having use for ten dollars of candy, I reached for my cash.  I only had one dollar and the Pepsi and CheezIts cost two.

The homeless man said: “Oh no, don’t worry about it, I’m OK.”  As if he didn’t need the food, as if his desire to be treated with an ounce of generosity required him to plead his strength.  It’s a degrading facet of American society that I hate.  It reminds me of the other day when I tried to take a bus but I was 50 cents short and the driver made me get off at the next stop.  I can’t count how many times in Israel I didn’t have the right change and was allowed to ride the whole way.  I was never asked to step off.  There is more to life than money, and it doesn’t cost a cent to be nice.

I insisted that I get the homeless man something despite his insistence that he was “OK”.

I gave the Indian man the one dollar I had and told my friend to grab the CheezIts.

He said “God bless you, thank you, have a blessed day.”  And I wished him the same.  I love moments like these.

America is the land of the dollar bill.  The question is whether you’d like to use it as a reason to kick someone off a bus, or take the spare one in your pocket and make someone happy.

You can wait for “policy makers” to fix your problems, or you can do something today to be nice to someone.  You can resent people for being poor, or you can show a little generosity.

Tweeting and “liking” and raising awareness don’t bring joy to people’s hearts.  Looking someone in the eyes and treating them like a human being does.

Today was a reminder for me that Americans are people too.  That some are rigid and unforgiving and cruel, and some are spontaneous, kind, and warm-hearted.  For all the cultural differences, there are nice and mean people everywhere- and it’s sometimes hard to figure out who is who.  What is kind in one culture could be cruel in another.  There are also cultural norms which aren’t moral even if they’re common.  And there are of course the individuals within this haze, whose kindness I’m trying to evaluate.  When you are able to have that clarity, it really makes life a lot better.  To avoid the mean people, and to merge your light with that of other bright souls.  To illuminate some space for each other in a sometimes dark world.

Generosity is something we’re all capable of, no matter how much we have.  Do it- it’s the best medicine one can find besides a warm bowl of matzah ball soup.  For yourself, and for the people you’ll help.  Do it now.