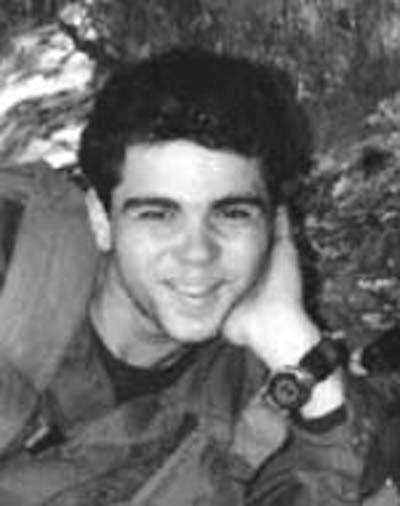 Tonight, after a delicious dinner of Kavkazi dumpling soup, I met Ruslan Yosifov.  Ruslan was killed 20 years ago today by a roadside bomb in Lebanon.

How did I get to meet this brave young man?  Let’s start from the beginning.

I was walking around exploring Ramat Gan, an interesting and diverse suburb of Tel Aviv.  I was feeling hungry after a day of trekking around so I got really excited when I saw the sign “Restaurant Uzbekistan”.  It’s a Kavkazi-owned restaurant that serves Kavkazi, Georgian, and Bukharan food.  I jumped in and ordered Dushpara.  Honestly, it kind of reminds me of a Central Asian wonton soup with a little vinegar.  De-licious! 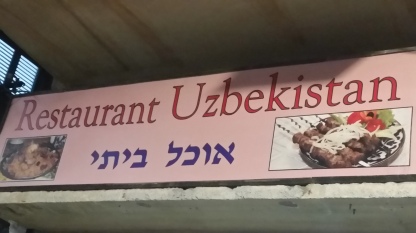 I got to talking with a handsome young man who works in the restaurant.  His name is Adam and he’s half Kavkazi and half Russian.  He was born and raised in Israel but has relatives in Siberia and Vladivostok.

He just got back from a trip to Russia and he told how he had had an issue with his cell phone there but nobody in Russia would help him.  He spent an hour just trying to get someone to help him fix his phone before boarding a train to Siberia.  He told me this would never happen in Israel because we’re family here.  If you need something, you just ask for it and people help.

I told him I’ve had the exact same experience.  In the U.S., my experience is that people are more suspicious of each other.  If someone asks you for help, you often wonder what their motive is, especially if it’s a stranger.  To the contrary, today in Israel I hitchhiked for the first time in my life and it went…totally fine.  I had a great conversation too!  And to make things funnier, as Adam and I were talking about this, his phone charger wasn’t working so I simply took out mine and gave it to him.  We laughed about how our conversation became reality.

Adam is 17 which means next year, he’ll be drafted into the Israeli military.  Adam is an extremely fit guy- he trains twice a day (and if he could, he’d do more).  He told me he wants to be in a combat unit- the most prestigious and risky choice.  Prestigious because you’re serving your country with great honor.  Risky because you’re more likely to die.

He’s a sweet guy with a really optimistic attitude.  I noticed that everything he was wearing was made in America- his Billabong bracelet, his Adidas shoes, and his U.S. Marines t-shirt.  He asked me how cheap McDonald’s was in America and I told about him about bacon cheeseburgers (he doesn’t keep Kosher- he was fascinated by this American creation that doesn’t exist here).  He’s never been to America but wants to go one day, maybe after the army.

I was wrapping up my meal when another man walked in, a relative of Adam’s.  The man was showing Adam and another woman pictures and videos of something on his phone.  Because this is Israel and it’s perfectly acceptable to nose your way into something, I asked what it was all about.

That was when I met Ruslan.  Ruslan was Adam’s cousin.  Ruslan was also a Kavkazi Jew.  In 1997, at age 21, just one month before he was supposed to be released from the military, Ruslan was ambushed in South Lebanon and then killed by a roadside bomb.  20 years ago today.  I was overcome with sadness and shock.  Nothing like this has ever, ever happened to me in the U.S., especially not at a restaurant with people I just met.  People here are very open and I was honored to have his story shared with me.  I told them I would say Kaddish for Ruslan this week at synagogue and that I prayed his memory would be for a blessing.

So now it’s time to act.  Ruslan was a brave soul who fought to keep Israel safe.  His cousin Adam, even in spite of this loss, wants to join a combat brigade and put his life on the line for me and my country- my family.

Please keep Ruslan’s memory alive by writing a message of hope, blessing, or encouragement below.  You can also check out his Facebook memorial page and post a note there.  If possible, write in Hebrew, but if not it’s ok, I will reply to your comment with a Hebrew translation so his family can understand.  I will share these hopeful sparks with his family on this tough day.

When I left the restaurant, Adam told me “we need more people like you here.”  After dozens of people giving me all sorts of grief about making aliyah- even some telling me to turn back and go to America- this is the nicest thing anyone has ever said to me.  It radiates kindness.

Let’s radiate some kindness back.  Adam- I’m glad there are people like you here to welcome me and keep me safe.  I’m glad your cousin was here and I’m sorry he’s not anymore.  We may have just met, but as far as I’m concerned we’re family.  We’re Israel.

5 thoughts on “A Kavkazi soldier died in battle today”