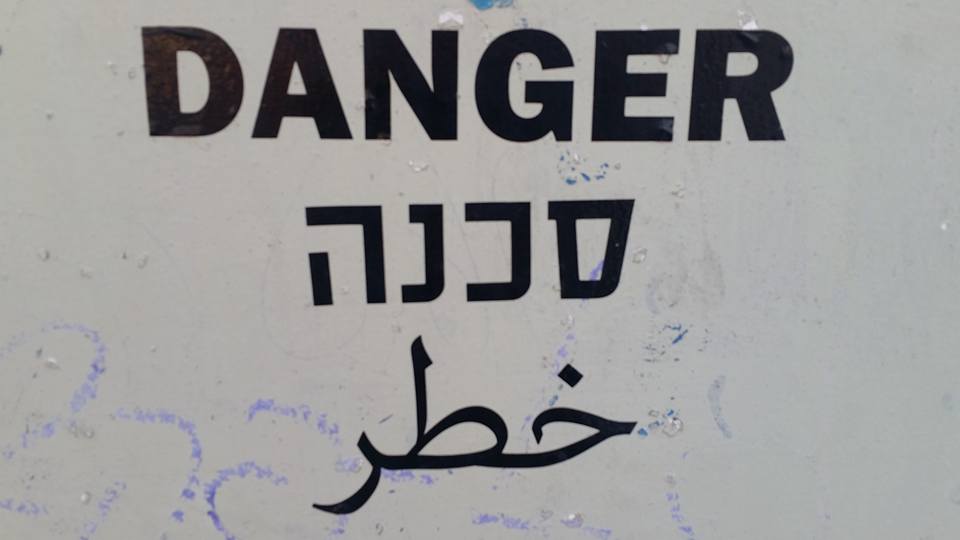 Recently, I was talking to an Arab friend in Arabic.  He said there are three groups of people here.  One, Arabs who think this whole land only belongs to them.  Two, Jews who think the same thing about themselves.  And three, Arabs and Jews in the “mushy middle” who want to live together.

I think I agree.

Today, I saw a good demonstration of how this plays out.

After lazing around on the beach on a gorgeous day, I had some extra time on my hands.  Because I live in by far the most fascinating country on the planet, I simply slipped my sandals on (and then off) and walked into a mosque.  The Hassan Bek Mosque is a historic building located in the middle of Tel Aviv.  It was built in 1916 and to this day is an active mosque.

According to what seems to be a pretty well-sourced Wikipedia article, the mosque was built on land that the Muslim governor of Yaffo confiscated from Arab Christians.  Later, it was used for Arab snipers shooting at Jews.  During the 1948 War of Independence, Israel captured the area.  The houses were largely razed and some troops wanted to demolish the mosque itself, which was vetoed by future Prime Minister Menachem Begin.

At various times it was going to be turned into real estate development (stopped by protests) and may have housed a suicide bomber, which led to some Jews throwing firebombs and some Arabs hurling rocks at the Jews from the mosque.  Arabs then threw rocks at Jewish motorists and some Jews threw a pig’s head into the mosque.

In short, a microcosm of the region’s conflict, some of which I didn’t know about until writing this blog.  Depressing and important to be aware of so you know where everyone is coming from.

If you go to the mosque itself, it’s just gorgeous.  You wouldn’t know any of that crap if you just enjoyed the beauty of the building itself.  Here are some pics: 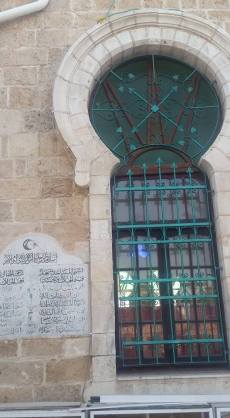 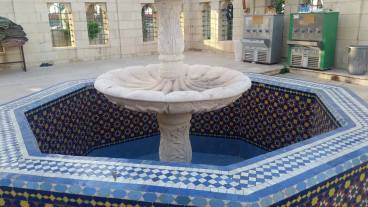 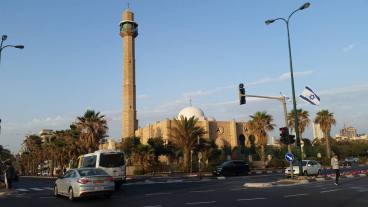 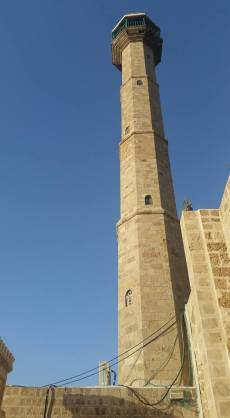 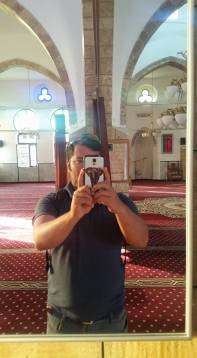 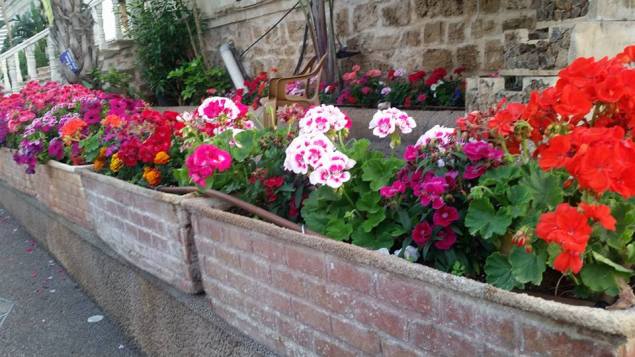 After some peaceful reflection, perusing the beautiful books (including Qurans from Egypt and…Saudi Arabia!), I talked with a man inside.  We chatted in Arabic because I wanted to know what a sign meant.  It said (in Arabic) “Tasu is in danger”.  I knew “is in danger” but didn’t know what the word “Tasu” was.

He explained it was the name of a cemetery in Yaffo (Yafa in Arabic).  A Muslim cemetery which, incidentally I had visited in previous adventures, that is now possibly going to be turned into…a hotel.  When you consider the long history of conquest and re-conquest and desecration this land has known, it’s just so, so sad.  I patiently listened as he explained the situation and I shared my sympathy.  It’s hard to imagine a Jewish cemetery becoming a hotel here- the government is excruciatingly diligent about not building on Jewish graves due to prohibitions in Jewish law.  So much so that even Secular Jews get peeved by it.

The man pointed me to pictures of the neighborhood (called Manshiyya before 1948) on one of the columns.  The pictures were sad and the descriptions in English were pretty brutal.  Here is a slideshow:

Occupation, nakba, bombing, demolition, ethnic cleansing- these are their words in English.  The sad part is there is some truth to what they’re saying.  As I’ve written about extensively on this blog, some Zionist militias forcibly expelled Arabs in 1948.  That’s not a theory, it’s a fact.  It’s also true that few things are black and white and the language used on these signs, in English for tourists, was as bombastic as possible.  Their existence perhaps evidence that Israel’s freedom of speech is a bit healthier than some expect.

No mention was made of the Christians whose land the mosque is built on nor the Jews who were shot at from its property.  I understand the anger of the worshipers especially in light of the recent cemetery controversy.  I also wonder if these signs are presented in a way that fosters knowledge of the past for the sake of building a better future.

Feeling sad and angry (both at the interjection of the painful past into my present and at the real estate developers who are about to turn a Muslim cemetery into a hotel), I walked back to the man.  I told him in Arabic: “I’m sorry for what’s happening.  I’ll pray that they don’t turn your cemetery into a hotel.  In the end, we must live together.”  He gave me a big smile and a handshake.

This man knew I was Jewish.  I can’t change the past- not the fact that this neighborhood was destroyed, nor the hateful acts committed on all sides in this place, nor the cemetery issue itself.  Although I plan on speaking out about it now.  What I did was just try to warm someone’s heart.  In a place where I feel quite helpless about convincing politicians, I just tried to be a human and reduce the hate in the world.

Feeling extremely tense, I walked towards Yaffo, where later I’d be celebrating the Moroccan Jewish holiday of Mimouna.  I stopped for some food at an Arab-owned restaurant.

The owner was hot.  Physically, for sure, and also just really nice.  Khalid had a beautiful smile and an infectious and kind personality.  We chatted on and off for hours.

An American woman walked in totally confused.  I helped her order and translate between her and Khalid.

Khalid noticed how I helped her and several other customers with the menu and I made some corrections to the English on their fliers.  He asked me if I would work with him.  I was surprised.  He basically said I had a nice connection with the customers, I knew public relations, and he needed help.

As I considered what had to be one of the kindest and most interesting job offers I’ve ever gotten, the American woman asked me about Gaza, about refugees, about pretty much everything that makes me cry a lot.  When the complexity and the sadness just overwhelm.

So instead of policy solutions (which Americans love), I gave a different answer.  I said: “If you want to live here, you need to know the past.  Insofar as the past helps you make a better future.  If you fixate only on the past, you’ll never see your way out and we’ll be stuck in a never-ending blame game.  We have to also live in the here and now and a better life together.”

Khalid then looked at me while the woman grabbed her purse.  He said: “Don’t pay for your food- we’re business partners.  You have to come work here.  I don’t see religion.  I see that when someone looks me in the eyes, I trust him.”

With a true feeling of gratitude, I headed to Mimouna.

What I wish for the Middle East and for my beloved country of Israel and the Palestinian people is this.  Know our past- and know the past of the other peoples of this land.  And don’t get stuck in the swamp of never-ending hatred, sadness, and guilt.  We don’t have time for it- we only get one life.  Know the past to learn from it and make a better future.  Let’s build it together.  Let’s live in the complicated space that is the Hassan Bek Mosque next to the serene park built on its neighborhood’s ruins next to the gorgeous beach we all enjoy.  Let’s live in the Mimouna party of Moroccan Jews who are my friends and whose families were expelled by Muslims in North Africa.  And who continue to celebrate the customs they once shared with them.

This place is messy.  It needs healing.  Put down the megaphones, put down the guns, and most importantly put down the sense of ultimate righteousness and purity.  Because we’re all a little dirty and wouldn’t it be better if we had someone to scrub our back and clean those hard-to-reach spots?