Yes, the title is exactly what you think.

As an appropriate sequel to my blog “Bedouin Yiddish“, in which I discovered a Bedouin man who speaks Yiddish in Rahat, I found Bedouin speaking Arabic in Bnei Brak!

Before we get to that, let’s start at the very beginning.

Today, I was planning on visiting the West Bank.  Area C, where Israelis can visit, is where I’ve made contact with a Palestinian practitioner of non-violence who partners with Israelis (including settlers).  However, feeling rattled after yesterday’s “preview of a terrorist attack“, I decided I wasn’t in the right frame of mind to make the most out of the experience.

Instead, I made my way to Bnei Brak.  I’ve written a lot about this Haredi city of 200,000 people on the doorstep of Tel Aviv.  My first Haredi hug, my first time praying in a Hasidic shtiebl, Satmar Yiddish newspapers, the hot guys, and the time I got a blessing from a Vizhnitz Hasid.

Speaking of Vizhnitz, that’s exactly where I went today.  Kiryat Vizhnitz, named after the town in Europe where the Hasidic dynasty was founded, is a part of Bnei Brak I knew less about.

Knowing that there was a renowned Vizhnitz bakery AND a Yemenite Haredi bookstore, I knew this was my destination for the day.  Quench the thirst of my soul and my stomach!

I started at Nosach Teiman, a Yemenite Jewish bookstore and Judaica shop.  The riches of this small store are innumerable.  I bought loads of Yemenite music, a Judeo-Aramaic calendar (!!), prayers written in Judeo-Arabic, and a book of Judeo-Arabic expressions translated into Hebrew.  It does not get any better than this.  Here are some pics: 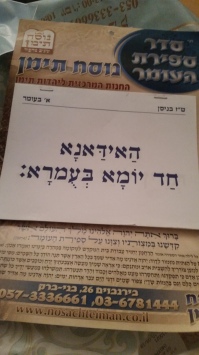 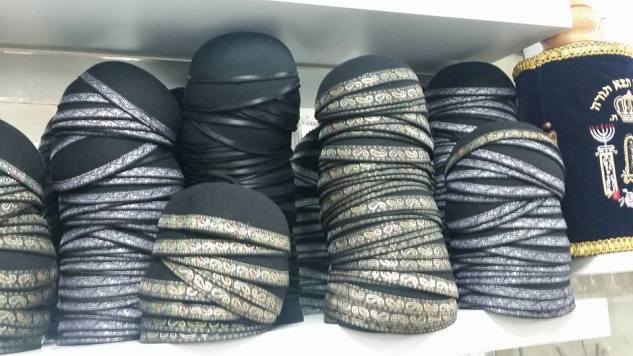 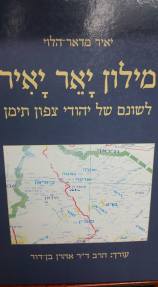 They even had Yemenite Jewish clothing, make-up, and perfume for sale.  For a community that had to escape by the skin of its teeth from fanatical neighbors who wanted to exterminate them, they’ve sure done an amazing job of preserving their culture upon arriving to Israel.  While unfortunately fewer and fewer Yemenites here speak their unique language, I did hear a few words in the store- which I could mostly understand with my Arabic!

Energized, I headed to the Vizhnitz bakery, sure that I’d also find new adventures on the way.  On my way there, I came across several yeshivas.  The first, a Sephardic one, where I got a free book called “Mishnah Brurah”.  It’s old and beautiful- and free.  Bnei Brak is one of the few places on the planet where you’ll find timeless beautiful books simply sitting outside waiting for you to grab them.  For free or minimal cost.  These are the Jews who truly continue to embody that we are the “People of the Book”.  Looking for Jewish knowledge?  Skip Amazon and head to shuls in Bnei Brak.

Down the street, I saw the Belz Yeshiva.  There’s a famous song about the shtetl, or Jewish village, of Belz that once existed in Eastern Europe.  So to see the town recreated in front of my eyes- its Jewish presence in Europe exterminated- was awe-inspiring.  As Holocaust Remembrance Day approaches in Israel, I couldn’t help but let out a huge smile.  As the famous Yiddish resistance song says: Mir zaynen do.  We are here.  In the face of Nazi persecution, Christian annihilation, Islamic fundamentalism, ever-shifting anti-Semitism on both left and right- we exist.  We survived.  We. are. here.

To see my heritage continue in the face of 2,000 years of European brutality is a miracle.  It fills me with hope, wonder, amazement, and joy.  Our mere presence is a victory in and of itself.

I headed to the bakery with a fulfilled soul and a hungry stomach.

The bakery was delicious.  It was nothing but challahs left and right.  Some huge, some small and all a bit sweet.

While I noshed on my challah, I noticed something interesting- a sign with baking instructions in Arabic.  Bnei Brak is 1000% Jewish.  A mixed city this is not.  A secular person moving here would be considered a mixed population.

Then I noticed a tan-skinned man yelling in Hebrew at a Hasid.  Something about business.  Given how everyone yells in my neighborhood- even when not angry- I didn’t make much of it.  Must just be a Mizrachi guy who does business with Vizhnitz bakers.

Then I heard the most unexpected thing ever: Arabic.  And not Yemenite Judeo-Arabic.  Arabic from here.  I approached the tan men in Arabic.  Their eyes widened with excitement and surprise.  You have to remember I’m wearing a black yarmulke, a kippa, a head covering.  I look, for all intents and purposes, Modern Orthodox.

Turns out, they’re Bedouins.  I told them I had been to Rahat (where I discovered the Yiddish speaker).  They said they lived in a nearby town of Ad-Dhahiriya, whose name at first I confused with Nahariya, a city in the North of Israel.  Only once I google its name right now did I realize…it’s a Palestinian city.  In the West Bank.

We had a great talk about the Bedouin dahiyye music I like (they’re going to teach me the dance next time) and I was proud to hear, as I walked away, them say “wallahi bye7ki 3arabi mnee7”.  Wow he really speaks Arabic well.  My smile inside and out could not be bigger even as I write this now.

While Yemenite Arabic in Israel is struggling, I found Bedouin Palestinians who are keeping Arabic alive in Bnei Brak.  While my trip to the West Bank didn’t happen today, I did end up meeting Palestinians.  And having fun.  And hopefully warming a few hearts, like they did mine.

Still hungry, I grabbed a sweet for the road.  The man at the store turned out to be a fellow polyglot.  He spoke Hebrew, Yiddish, French, and English.  And a straight-up Haredi Jew.  We shared a fantastic short conversation in all languages.  I bet you didn’t expect that in Bnei Brak.  Or the gluten-free falafel I found.  Or the multilingual dictionaries for learning Arabic, Hindi, Chinese, Italian, Spanish, Farsi, and Yiddish (the latter possibly for Mizrachi Jews).  All alongside a side for “kosher” phones that filter out “non-kosher” content.

What I hope you take from this adventure is the unexpected mystery and glory of finding new places and new people.  Bnei Brak is an awe-inspiring place.  With things that will surprise you if you open your mind and heart to the possibilities.

On my way back to Tel Aviv for a Eurovision concert headlined by Dana International, Israel’s first transgender superstar, I felt sad taking my yarmulke off.  I like my black yarmulke.  It suits me.  Not as a decoration and not just as a sign of respect for Bnei Brak.  But because I like that part of me.  That heimish, passionately Jewish, bookish, dancing-down-the-aisles Matt.  The Hasidic part of me.  The Haredi part of me.

And I don’t like feeling that I need to take it off when I come back to Tel Aviv, especially at an event with a lot of gay people.  Who- and I understand why- will be afraid to talk to me because of it.

I shouldn’t have to sacrifice bits of my soul to keep other people happy.  Nobody fits into a box- boxes are boring.  I’m glad I explore different things and my life is much, much richer for it, even with the challenges.

When I go to Bnei Brak now, I’m not just a visitor.  I know this place.  And I like some of it.  I hope it continues to passionately preserve its Judaism and I hope it can find ways to be more inclusive of people like me.  And I don’t know how possible it is to do both.  I would like to try- I suppose I already am.

So next gay party, don’t be surprised if I put on my yarmulke for a bit- just to see how it feels.  And to see how you react.

And next visit to Bnei Brak, don’t be surprised if I linger a bit under your city’s rainbow-colored flag to take a selfie.  Because inside it feels really queer.

Just like speaking Bedouin Arabic in the middle of a Hasidic bakery.