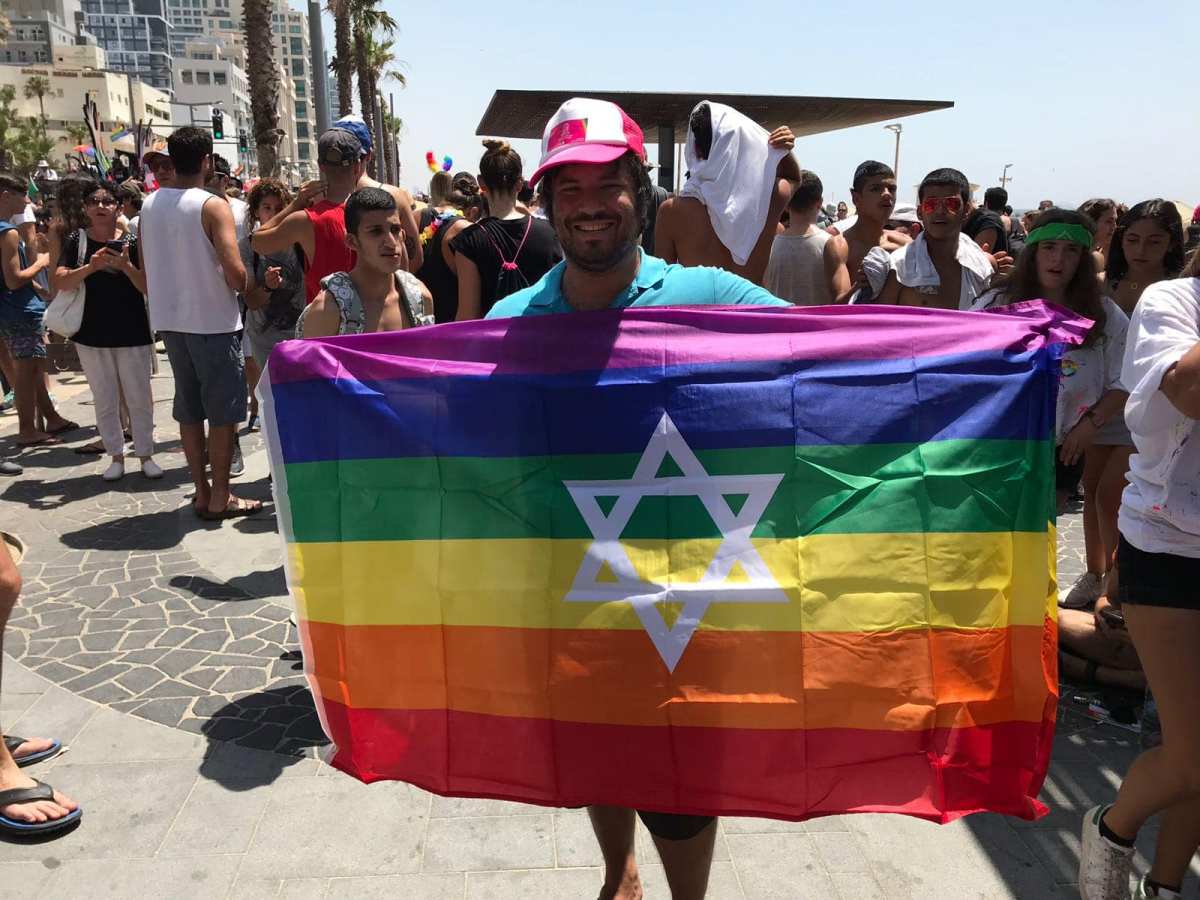 Today was my first Tel Aviv Pride.  Every year, thousands of Israelis and tourists gather to celebrate the LGBTQ community here in Israel.  There are floats and sexy guys and it’s awesome.

For the first time in my life, I got to experience it.

In America, I marched in many pride parades- almost always with Jewish groups.  This time, the parade itself was Israeli, so the idea of a Jewish group marching is obsolete- we are the parade.

The parade itself was actually slightly more sexually conservative than in Washington, D.C., which may amaze my Israeli friends.  And its energy was amazing.  There was such a sense of community.

Rather than marching with organized floats, the parade was Israeli- everyone could join in.  There’s no “order”- it’s just splendid flowing chaos of hot guys (and gals).

I came wearing an Israeli flag and ended up buying a Star of David pride flag along the way.  Because Israel is the only country in the world where it is totally safe- even blessed- to be a gay Jew.  And to be proud of it.  Without worrying if people will throw you out of the parade for liking Israel.  Which is a thing unfortunately abroad.

While Tel Aviv pride was smaller than Washington (although still quite large), it felt special.  First off, it went off smoothly and safely.  Not something to take for granted here.  I want to thank the brave policeman and policewomen who every day keep us safe.  Whether it’s some crazy person within Israel- or a terrorist coming from without- sadly too many people want to harm both Israelis and the LGBT community.  I’m grateful that I live in the *only* country in the Middle East where you can count on the police to protect the pride parade rather than break it up.  I hope one day my queer Arab neighbors fighting for their rights will be able to enjoy the same sense of security.

What was also incredible about today, other than the sunny weather, the post-parade swim at the beach, and the pride Shabbat services I went to, was who I went to pride with.

I first started by making plans with my friend Miriam.  A Spanish Jew who I befriended in D.C., she wisely followed me to Israel 😉  My friend Daniel was also in town from America, so we had a trio.  Then I got a message from Ezequiel, a gay Argentinian-Israeli friend of mine, so he and his Arab friend Ahmed joined us.  This was Ahmed’s (pseudonym) first pride parade- you could tell he was a bit nervous and perhaps somewhat closeted.  And wow am I proud of him for being brave and coming.  Being a gay Arab is not easy- as several friends of mine in their community have shared with me.  One Arab lesbian friend of mine stays in the closet for fear her family will kill her in an honor killing.  There are Arab families who do accept their children and unfortunately a lot who don’t.  Forcing queer Arabs into a difficult identity dance in both (largely Jewish) LGBTQ culture here and their background.  I’m glad Ahmed found a sense of belonging in the parade- you could see him flitting back and forth, often losing track of us as he made new friends.

We were joined by Kate, an Australian soon to be Israeli.  And along the way, we met a Ukrainian girl named Natasha (pseudonym).  Natasha is a lesbian from Haifa of Ukrainian background- this was her first pride.  She’s Jewish and not religious in the slightest.  Sadly, her Catholic girlfriend is still living with a lot of stigma so she wouldn’t attend.  She was alone- and I invited her to join us.

Later on, we were joined by an exceedingly hot Argentinian-Israeli named Ariel and his wife.

Kitzer, or “in short”, there we were: gay (me, Natasha, Ahmed, and Ezequiel) and straight (everyone else).  Australian, Argentinian, Spanish, Israeli, American, Ukrainian, Arab, Jewish and not.  A melting pot of newcomers and veterans (Miriam has marched with me on two continents!).  The beauty of Tel Aviv 2018.

There are people who reduce Israeli queer life, the most vibrant in all of Asia- the biggest continent on Earth- to “pinkwashing”.  This phrase is meant to say that when Israelis talk about their queer pride, they are simply using it to “cover up” the difficult reality facing Palestinians.  That we don’t deserve credit for our advances even if in other areas things aren’t so simple.

This is what I have to say: fuck you.  Do Palestinians face hardships?  Of course.  Some of those caused by Israel and not a small number caused by their own extremists or surrounding Arab nations.  And I pray for a day when they will be able to celebrate their own pride parades- and when their society will accept queer youth.  And when our two societies can live in peace.

Here’s the reality: while it’s true that the Israeli government uses gay rights as a promotional tool (often without giving us the full rights we deserve), our country is hands-down the most progressive one in the Middle East.  While some people want to turn our pride parade into a discussion about conflict, that doesn’t change some incontrovertible facts.  Palestinian society has harbored strong strains of homophobia long before the State of Israel even existed.  Homosexuality is illegal- sometimes punishable by death- in Syria, Egypt, Palestinian Authority/Gaza, Iran, Saudi Arabia, Qatar, Oman, United Arab Emirates, and Yemen.  If you really think this is because of Israel or Jews, it’s conspiratorial and anti-Semitic.  Believe it or not, other societies in the region sometimes have problems that have nothing to do with us.  And noticing that Israeli LGBT people openly serve in the military, enjoy anti-discrimination laws, and even serve as out-of-the-closet elected officials- that’s not pinkwashing- that’s the truth.

Some people are not capable of letting Israelis celebrate a single accomplishment without dragging us down.  We know- I know- that my country, like any other country, has things we need to change.  Guess what?  Your country does too.

While the far-left in Western countries continues to point the finger at us and tries to deny us even one day of enjoyment of our loving society, I’d like to point to an incontrovertible fact.

Today, I marched in pride with a Ukrainian lesbian and an Arab bisexual man- both citizens of Israel.  In their respective societies or homelands, their identity is often punished.  In Ukraine, by far-right thugs and in Arab society, sometimes even by your own family.

Israeli society isn’t perfect and the homophobia here exists as well.  Every society suffers this malignancy.

The main thing I want to point out is that despite the security risks today, the associated costs involved with putting it on, the rockets Hamas continues to rain down on us- Ahmed and Natasha could march in pride.  With me.  In peace and safety.

So rather than telling us how terrible Israel is, try asking yourself: “what have I done today to help people like Natasha and Ahmed?”  Because if you have the privilege of reading this from a nice laptop in a Western democracy, you’re pretty fucking lucky.  Because people like my friends don’t have many places to run.  And they don’t have the luxury of obsessing over every tweet.

They’re exploring their identity- and by the grace of the State of Israel- they can do without fear that this parade will be their first.  And last.