Today, I was supposed to go to Hacarmel Park for a hike to a Druze village.

The bus ended up taking foreverrrr so I decided to hop off and explore another adventure.

For a while, I’ve been Fureidis-curious.  The Arab village, decidedly not on any tourist map, is just north of Zichron Yaakov, one of my favorite scenic spots in Israel.

I’ve frequently gazed at Fureidis from there, at its beautiful gold-topped mosque, and wondered what was there.  After some very close calls in Muslim Arab villages, I have been hesitant to visit them alone.  While some places like Abu Ghosh are always safe, some of my more adventurous trips to Kafr Qasem and Tirah involved some scary situations.  Most people were awesome and I had a great time.  And for a few moments, I did worry about my safety.

Today, I felt the spirit was with me and decided to march up the hill.  Fureidis starts at sea level and goes all the way up a mountain.  It’s stunning. 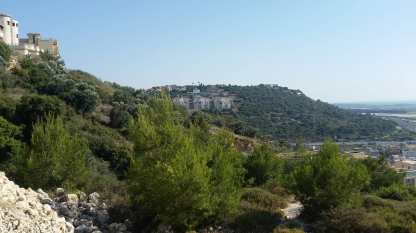 This being a small village, especially from a segment of society where there’s a lack of trust of the government, people coming from the outside, and sometimes Jews- I knew what I had to do.  The first four or five people I talked to- I introduced myself, explained who I was, where I was from, and how I learned Arabic (important, because I speak Syrian which sounds out of the ordinary here).  As is the case in many villages, I had to explain why I wanted to take pictures and, in short, earn people’s trust.

In order to get into the mosque, I spoke with one man to get directions.  I bumped into him- perhaps not coincidentally, up by the mosque again, but this time on a tractor.  Samir was very friendly and took a picture of me smiling.  I would not be surprised if I’m in some village WhatsApp group now.  I understand what it means to build trust, so I welcomed it.  Samir then tells me he has called a man who can let me into the mosque.

While I was allowed to take pictures outside, pictures inside were not allowed.  This is the first time this has happened in Israel, and I wonder why.  I’ve even filmed prayers in many mosques- perhaps there is a dispute about land usage, building rights, who knows.  Maybe it’s just suspicion of an outsider- because it’s readily apparent so few Jews (or non-Muslims) visit here.

It was a very welcoming conversation- Muhammad, the other man, was a really warm person.  And as he saw my intentions were good, he opened up.  And we talked about Ramadan prayers, the history of the building, the delicious qamar al-din drink (which I didn’t realize was made from apricots!), and his own wild adventures in the nearby forest as a youth.

I then headed to the forest.  Every step of the way, I asked people for directions, even when I knew more or less where I was going.  This makes me known and builds trust.  Remember that the police, even Arab police, work throughout Israel, and don’t always have strong relationships with the local populace.  I was once told by a Druze boy- the Druze are solidly Zionist- that some people would be suspicious of me in the village not because I was Jewish, but because they thought I was a cop.  Even an undercover Druze cop.

I walked through the forest, which was amazing.  The trees stood still, the air was clear, the ground rough and clay-like in color.  Except when radiant bits of cream-colored stone poked through.

To my right, I noticed some sheep.  How cool!  How many places in the world can you take a single bus line from a metropolis and end up on a mountaintop with sheep?!

Next to the adorable sheep was some sort of structure.  It looked vaguely like a trailer, an RV.  I suppose it was a house.  Perhaps one built without legal permission- I have no clue.  I do know that it’s a hot political issue, so I didn’t take any pictures.  I didn’t want people to think I was there to report them or cause trouble.

Two adorable kids, one 9 and one 15, came running over to me.  “Who are you?”  I told them I was from Tel Aviv (and America and was Jewish) and had studied Arabic in college.  I asked what they were doing.  They said they were picking vegetables.  There was a large garden, one might even say small farm, all around the house.

Without asking, they start handing me cucumbers.  Fresh, delicious, crisp cucumbers.  Straight from the garden.  Unwashed and unbeatable.

While I chowed down, we chatted.  One of the kids is a Barça fan.  He had a Messi shirt on and I told him it’s my team too 🙂  And that I visited there!  He was amazed.  Too bad the other kid like Real Madrid, we made fun of him 😀

It’s hard to describe to someone who doesn’t speak Arabic, but Arab kids here have a certain sweetness to them.  When I talk with them in Arabic, there’s a warmth- and it doesn’t matter if they’re Druze, Christian, or Muslim.  There’s a playfulness, a sense of fun, and kindhearted sincerity with laughter.  In a country where things can get rough around the edges, I find myself living in a deep deep smile when I talk to Arab young people.

Their father comes over and we talk in a mixture of Hebrew and Arabic about his farm.  All of the food is for his family.  He has five children.  And they live in the middle of the woods- it sounds absolutely fantastic.  Maybe I’ll do it one day.  All of his vegetables are organic and he has no desire to sell them- they simply feed his family.  Like I suppose all of us did back in the day.

Suddenly another son appeared with an injured lip.  I asked what happened- apparently their horses- because yes, they have horses- hurt him.  And he giggled.  While bringing me half a dozen more cucumbers.  Mmmmm.

We talked briefly about the lack of summer opportunities for kids (they mostly work) and how expensive schooling is (in Israel you have to pay for public school), but honestly I was more worked up about it than he was.  “Mah laasot?”- what can you do?  That was his response.  It was pretty clear to me he was more focused on living and not really interested in politics or complaining.  Just recognizing challenges and moving on to get the most out of things.

As I headed down the hill, I couldn’t help but think how important it was to share this story.

Personally, I’ve experienced this dozens of times in Israel.  Being invited into Bedouin, Druze, Christian- all sorts of Arabic-speaking homes.  Sitting sometimes for hours with people I had never met.  I never made plans with.  Just enjoying and talking and being with each other.

Very, very few Israeli Jews (or foreigners who come to visit- even to protest against my country) have had this experience.  And I’d like them to be able to enjoy it.

Because it is only with the power of language- and certainly a heavy dose of self-awareness and trust-building- that this happens.  This doesn’t happen because you read Ari Shavit or because you went to a political rally or because you ate hummus at an Arab diner or because you boycott Israel (good luck with that- this Arab town is in our country and the man who gave me a tour of the mosque used the phrase “Israeli Arabs” in Arabic).  Or any other of the multitude of superficial ways to engage with Arab culture- even when well-intentioned.

At a time when my country is under vicious attack by Hamas extremists, setting fire to thousands of acres of land and firing hundreds of rockets at my friends in the South, I built trust and had fun.  It was good for my heart, good for the people I befriended, and good for my country.  And I felt great.

To bring a little hope into the world, I speak Arabic.  I speak it because it’s beautiful, it’s related to Hebrew, it’s fun to mix them, it open hearts, it feels special to me.

I speak it so my 9 year old friend will grow up one day and remember, despite all the political tension, that a nice Jewish guy came around and joked with him about soccer teams in Arabic.  The only language he speaks.  That we, that I, care.  And maybe that will help bring a little more love and less conflict into the world.

It’s my firm belief that to learn a language you must fall in love with it.  Its sounds, its melody, its letters, its culture, its food, its history, its culture, its geography.  The grammar, the art, the calligraphy.  So that every chance you get to speak it- you do!  Not because you have to- this is the worst reason to learn a language.  But rather, because you want to.  You enjoy it, it brings you to a state of mind where you’re feeling good and passing that on to the interesting people you’re meeting.  Face to face, heart to heart.

None of my day would’ve been possible without Arabic.  If you had gone to the same village only knowing English or Hebrew (or for that matter, Arabic without Hebrew- our Arabic here is sprinkled with it)- you would’ve gotten as far as the hummus stand.  It just doesn’t build love here in the same way, to the same degree.

You want in on the fun?  To explore the real depth of this country, places few of your friends have even visited but are begging you to enjoy?

Here’s a unique opportunity.  I’m going to open an Adventure Arabic class.  We’ll learn together with the goal of going on a tiyyul, or trip, together at the end of the course.  To an Arabic-speaking village.  So that your Arabic won’t sit at home rusting, but rather get the chance to speak it in real life.

Because of the unique nature of Israeli Arabic, you need to already have a fairly strong command of Hebrew.  And besides that, a desire to learn and discover.

2 thoughts on “What’s beyond the hummus stand?”