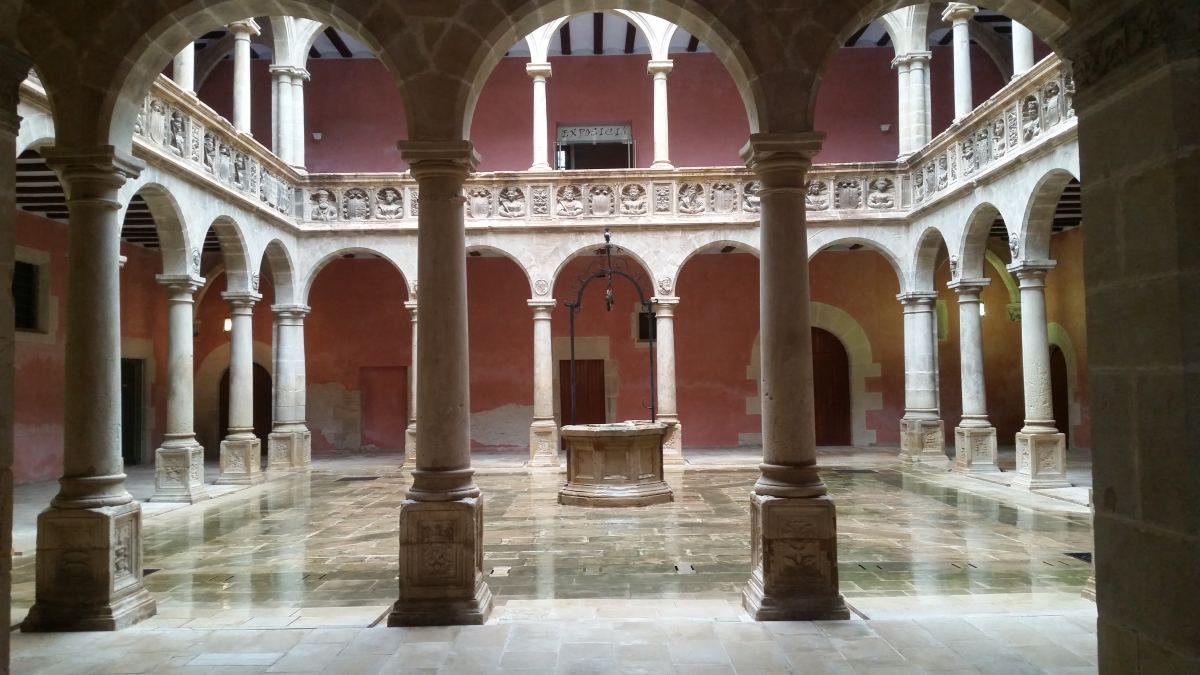 One of the biggest problems facing Israel is “hasbara”.  It is translated as “public relations”, “propaganda”, or “outreach”.  It comes from the verb “lehasbir”, which means to explain.

The idea is that Israel, like any other nation, needs to make its case on the world stage.  At a time when we find ourselves under rocket fire from Hamas (and the world barely seems to notice), it’s more important than ever.

The problem is Israelis aren’t very good at it.  Israeli mentality is rooted in that of a “start-up nation”.  In order to build this state, people had to be creative and, more importantly, just go for it.  There’s no time to refine rough edges or to polish words.  As I’ve written about before, bluntness is the name of the game.  After having personally experienced deep anti-Semitism in parts of Europe veiled in feigned politeness and verbosity, I understand where the mentality comes from.

The issue is that because Israeli culture is built on straight talk and getting to the point, making a nuanced case for the country doesn’t happen much.  And while talking about (very real) Hamas and Hezbollah fanaticism might work for the Fox News crowd, it just doesn’t touch the heartstrings of centrists and progressives in the same way.  Flexing your muscles is not the only way to get your message across.

Rather, it’s to show the diversity of Israel to help you understand the many layers of this society and break through stereotypes.  So that the next time you think of Israel, it’s not just rockets falling or political conflict, it’s also the Druze kid I talked about gay identity with in Arabic.   It’s the Haredi black-hat Jew who gave me one of the warmest hugs of my life.  It’s my experience in a Catalan archive reading the 500-year-old names of Jews forced to convert during the Inquisition.  And realizing that sadly, this kind of persecution continues to this day, making Israel the one safe-haven Jews can count on in times of need.  As Pittsburgh, my mom’s hometown, soberly reminded us just one month ago.

When you understand the depth of Jewish experience, when you see layer upon layer of complexity in Israel, you realize just how rich a place this is.  And how foolish it is to think of it in uniform shades of black and white.

And it gives you the courage to reach out to potential friends in new ways.

As some of you know, I have a strong connection to Catalonia.  I speak Catalan, I’ve been interviewed on Catalan TV and radio and newspapers about Judaism and Israel.  It’s a society thirsty to learn about my heritage- and one that inspires me to think differently about my own identity.

Over the past few years since learning Catalan, I’ve connected with thousands of new people interested in my culture.  When traveling in Valencia a few months ago, I even met a gay Zionist bookstore owner with a Hebrew tattoo who has become a dear friend!  I recently posted a 30-second Catalan language video about Israel’s diversity which reached almost 3,000 people in a matter of minutes.  It wasn’t anything complicated and it wasn’t about how terrible our enemies are- it was simply about the diversity of life that I enjoy here.  A diversity their media fails to show.  And it really resonated.

The other day, I was at the National Library of Israel.  If you haven’t yet visited this fascinating institution, do so.  It has over 5 million volumes of books, recordings, and archives.  It is the historical treasure trove of the Jewish people from around the world.  It’s a way for us to preserve our heritage for generations to come.  And most importantly, it’s free!  So instead of standing in line at some tourist attraction, go visit and explore thousands of years of Jewish history in countless languages.

Thinking of my Catalan friends, I decided to try an experiment.  My background is in public relations and social media marketing.  While I sometimes value a break from the endless streams of news feeds and clickbait material, social media does have the power to bring people together.  In ways impossible just a few years ago.

I took some pictures of a multi-volume Catalan dictionary I found at the library.  To the average visitor, it might not seem like much.  But to me, it was an absolute gem.  I poured through its pages, its worn binding drawing me to gently open its doors.

I posted the pictures on Twitter with Catalan-language messages about what I was reading.

And my friends responded.  Within 20 minutes, there were dozens of likes and shares.  All in all, 4,504 people have seen the two tweets, with absolutely no advertising budget.  The National Library responded with a cute short Catalan tweet. 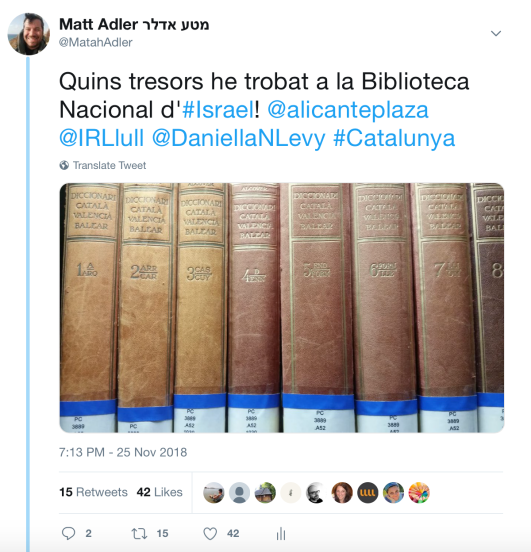 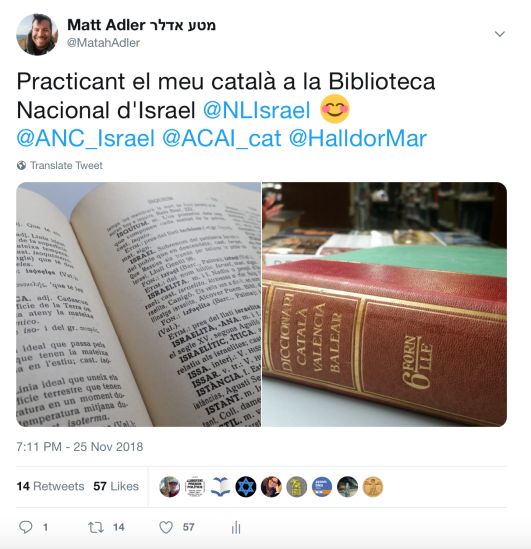 Why does all of this matter?  Isn’t Catalan just a small, useless language?  Israelis are practical- shouldn’t we just focus on Spanish and Chinese and Russian and English.  Why talk about culture?  We have rockets falling on our heads.  It’s a waste of time, it’s superfluous, let’s talk about the important stuff and “cut to the chase”.

This is the sabra attitude and while it works for creating the first Jewish state in 2,000 years, we sometimes lose out on building relationships with potential friends.  Catalan is not a useless language- I don’t even think there is such a thing.  But for starters, it has over 10 million speakers- more than Hebrew.  Catalonia has a GDP of $255.2 billion.  If you think Israel is a tourist magnet (we had a record-breaking 3.6 million tourists in 2017), the city of Barcelona itself hosted 8.9 million.  And from a strategic angle, Catalonia itself may become an independent country in the years to come and Israel would be wise to find friends wherever we can.

But beyond all of this, Catalans and Jews are minority communities persecuted by global powers.  In fact, the same ones- the Spanish state.  The very country that expelled us 500 years ago- and to this day remains one of the most anti-Semitic countries in the world.  Catalonia once hosted one of the world’s largest Jewish communities.  Its own language’s persistence is a tremendous feat that reminds me of how Jews have continued to survive despite thousands of years of being degraded.  Yiddish itself was once derided as a “jargon”, a useless language, just like Catalan.  We share the challenge and the belief in balancing modernity with preservation.  We have a lot of things that can bring us together.

So while some advocates for Israel continue with a one-dimensional message reaching the same audiences over and over again, I do something different.  Their message also needs to be heard, but it’s not succeeding in reaching important communities and it’s only part of the story.  I talk about what’s hard here, what’s awesome here, what’s benign and interesting.  I don’t demand unquestioned loyalty and I do show why our country matters.  I show the burnt fields of Sderot and I take people across the Mediterranean on a virtual tour of one of our best cultural institutions, the National Library.

Israel, like the Jewish people in general, is one of the most diverse, fascinating communities on the planet.  It’s a place where just this week, I saw an Orthodox man listening to Bollywood music on a train next to a Muslim woman in a hijab.  It’s a place where Assyrian churches pray in Aramaic- and where I hit on a cute Iraqi guy who speaks the language of Jesus in a gay club in Tel Aviv.

I admire our nation’s diplomats who are trying to make the case for our country.  And sometimes, we need to try something new.  It’s true there are people who irrationally hate us and who we’ll never convince to embrace us as fellow human beings.  And it’s also true that there are people who like us, if we choose to reach out with sensitivity, nuance, and heart.

Don’t keep doing the same thing and expect a different result.  I reach out to Catalans and make Arabic-language videos for Syrian refugees (hundreds of whom engage with me) and march in gay rights rallies.  Not because they’re “big cultures”.  It’s because they’re not.  They’re like me.  They’re neglected, they’re minorities, and they matter.

So next time you see a Catalan tweet from the National Library, don’t wonder why it’s useful.  Look around you at the State of Israel, at the Jewish people, and realize we’re proof that there’s no such thing as a small culture.

My cover photo is from the city archives of Tortosa, a beautiful Catalan city with thousands of years of Jewish archives I explored this summer.  Find your adventure 🙂